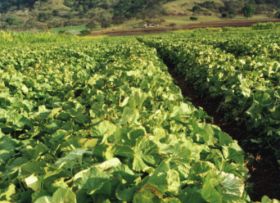 Central America is set for a bumper melon crop this winter, with good growing conditions reported across the region. While acreage continues to decline in Costa Rica, the main supplier to Europe, increases in Honduras and Guatemala are due to offset this shortfall.

Fernando Ajú of Costa Rica’s Melopen said adequate levels of rainfall had reduced the incidence of white fly and other plagues, which had a major impact on last season’s crop. “Once the season’s up and running we expect to ship 35-40 weekly containers of Honeydew and 15 containers of watermelons to Europe,” he said.

While Melopen said its planted area would be broadly in line with last season at 425ha, Costa Rica’s acreage is expected to decrease overall, in line with the trend seen in recent seasons. Steven Fagg of Keelings said Yellow Honeydew acreage was rumoured to be down by155ha in 2013/14.

Growers in Honduras, meanwhile, claim 2013/14 could be the strongest campaign in ten years. A report in El Heraldo said the industry was aiming to reach sales of US$60m compared to US$56.1m in 2012/13. Grupo Agrolibano expects to see a 5-10 per cent increase in volumes, mainly due to new production of Yellow Honeydew. Commercial manager Keny Molina said the company had increased planted area and expanded its product range in a bid to develop new markets in Asia and Latin America. The company is due to start harvesting on 10 December, with production running through to mid-May.

Terry Watts of UK importer Vidafresh is anticipating a strong start to the season. “We expect volumes from Brazil to fall away earlier than usual due to the serious leaf minor problem and water shortages in the region,” he said. “However, the market will quickly balance out as other countries come on line with production.”