August saw a surge in shipments to Brazil, Algeria and the UAE 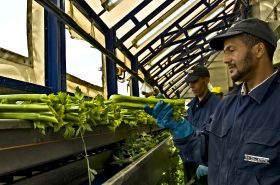 Spanish fruit and vegetable exports to countries outside the EU increased by 52 per cent to 43,123 tonnes in August compared to the year-earlier period, according to figures from the General Directorate of Customs. In value terms shipments rose by 13 per cent to €35.13m.

However, overall exports to non-EU countries accounted for just 7 per cent of Spain’s export total and the rise is not enough to make up for losses caused by the Russian ban.