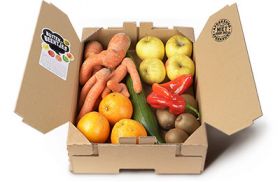 The Misfits boxes will include a range of seasonal produce

Dutch retailer Albert Heijn is to sell less-than-perfect produce for the first time, bringing it up to speed with a trend already seen in the UK, France and the Netherlands itself.

According to the group, consumers have become increasingly willing to purchase fruit and vegetables that don't make the grade in terms of visual perfection but are just as tasty, nutritious and safe to eat, opening up a new market opportunity.

Its new Buiten-Beentjes (Misfits) boxes will be sold online only at first, and will contain misshapen or less attractive seasonal fresh fruit and vegetables with the same shelf-life and taste. “We are starting with apples, kiwifruit, oranges, peppers, cucumbers and carrots,” confirmed a spokesperson.

A recent study carried out by officials in the Netherlands and Sweden found that Europe wastes around 89m tonnes of food every year, underlining a growing need to reduce the amount of fresh produce thrown away.

Meanwhile, the fact that imperfect fruit and veg tend to be around 25 per cent cheaper than their conventional, high-grade equivalents is also encouraging retailers to pick up on the trend for irregular-shaped produce.

“There are more and more customers who find the appearance of fruit and vegetables is less important,” the spokesperson added. “It does not matter to them that a cucumber is crooked, but whether it is nice.

“For these customers, we have put together a package of fruit and vegetables that are less beautiful, but just as tasty: the Misfits. These are just as good in terms of quality, taste and shelf-life and cheaper too.”

Although the potential margins on such lines are apparently not as high, the impact appears great in terms of marketing and helping retailers show their customers that they care about the environment and the cost of food.

There are also signs this is not a passing fad. Albert Heijn has said it plans to offer misshapen fresh produce on a permanent basis in all of its larger stores if the online trial proves successful, but pointed out that there was in fact not enough supply of second-grade produce to maintain a presence in certain stores, especially in cities.

French group Intermarché ran a much-publicised campaign during the spring of 2014 in praise of a new line of ‘ugly’ fruit and vegetables, and is now in the process of rolling out the Fruits et Légumes Moches range to its entire 1,800-store network.

Other French retailers including Auchan and Monoprix are understood to be preparing similar campaigns.