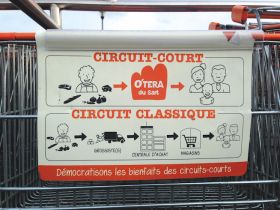 French retail supply chains, like this one visualised by northern French chain O'tera, are changing the way fresh produce is procured and sold

You have probably heard the story about that time in the 1960s when Chinese premier Zhou En Lai was asked at a press conference to comment on the lessons of the French Revolution of 1789.

“It’s still much too early to tell,” he said. It’s a fair bet that the lessons of a new revolution that is underway in France’s food retail sector will be learned rather sooner by food retailers elsewhere in Europe, because it is clear that something important is happening in France that has implications for everyone in the business.

French consumers have taken to online shopping in a big way. There are now some 3,000 so-called ‘drive’ stores in France from where shoppers pick up the groceries they have ordered online. These ‘dark stores’ are sited at convenient locations, almost always far away from the physical store but, significantly, often right next to a new type of fresh food store.

Grand Frais (literally ‘Big Fresh’) is one such chain of stores, a new fresh-food-only outlet that focuses on quality products at affordable prices. The format is akin to a supermarket but without those household goods that you will likely have picked up at the drive store next door.

Elsewhere, hypermarket chain Auchan has launched its own fresh-foods store called Les Partisans du Goût. Much like Grand Frais, it presents itself almost as if it’s a traditional covered market, but twinned with the convenience of the supermarket layout.

And in northern France, a new chain of local farmers’ market has opened up under the name O’tera. It has taken the supermarket template and applied it to the farmers’ market concept, an eye-opening idea that is winning new shoppers who welcome the product innovation and clever ideas that are behind the store.

I liked the way they take twenty-first century technology and give it an artisan feel. It works. Across the country, France is providing lots of food for thought.

To find out more about new trends in food and fresh produce retailing in France, see the January 2015 edition of Eurofruit. To secure your copy, please contact subscriptions@fruitnet.com or telephone Michelle Walsh on +44 20 7501 0311. Alternatively, you can read the entire issue online for free.