New project sets out to grow bananas and sweet potatoes in parts of Ethiopia, Tanzania and Uganda 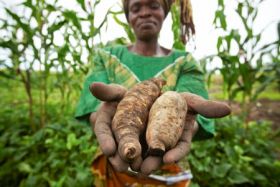 A pioneering scheme backed by the Bill & Melinda Gates Foundation is aiming to improve food security in parts of Africa by establishing new production of bananas and sweet potatoes, it has been revealed.

Known as Seed, Farmer, Market and Consumer – SeFaMaCo for short – the four-year initiative will be implemented by development group Farm Concern International (FCI) and involve production projects in Ethiopia, Tanzania and Uganda.

“We envisage a partnership which will translate into engaging hundreds of thousands of farmers as respectable players in [the] sweet potato and banana value chains across the three countries,” commented FCI’s Africa director David Ruchiu at the scheme’s official launch.

Sweet potatoes will be grown in north-west Tanzania (including the island of Zanzibar), eastern and northern Uganda, and southern and western Ethiopia.

New production of bananas, meanwhile, will be established in north-west Tanzania and central and western Uganda.

SeFaMaCo is just one project benefiting from the Bill & Melinda Gates Foundation’s efforts to improve agricultural productivity in Africa by backing the proper use of fertilisers, crop rotation, timing and planting techniques.

For growers in Tanzania and Uganda, new and better-performing types of banana are expected to be made available thanks to another programme being funded by the organisation to develop and distribute higher-yielding, disease-resistant varieties.

Meanwhile, the foundation has also supported the world’s first human trials of genetically modified bananas, enriched with beta-carotene that convert to vitamin A in the body. The trials were due to get started in the US during the second half of 2014.

“The world has already developed better fertiliser and crops that are more productive, nutritious, and drought- and disease-resistant; with access to these and other existing technologies, African farmers could theoretically double their yields,” said Bill and Melinda Gates in their recent annual letter.

“With greater productivity, farmers will also grow a greater variety of food, and they'll be able to sell their surpluses to supplement their family's diet with vegetables, eggs, milk, and meat. With the right investments, we can deliver innovation and information to enough farmers in Africa to increase productivity by 50 per cent for the continent overall.”