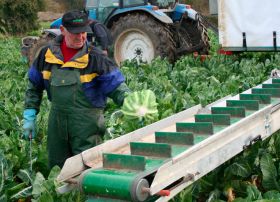 Sica, the Brittany-based group of vegetable growers, has announced a drop in turnover of 15 per cent last year to €184.7m.

"We have not faced such a crisis for at least 20 years," said president Jean-François Jacob. "Three-quarters of farmers have lost 20 per cent of their turnover."

Few products have reportedly been spared. Cauliflower sales have apparently fallen by 37 per cent, while endive prices have been at rock bottom all season.

Sica also saw early potato sales tumble by 50 per cent, with over 2,000 tonnes being destroyed or left in the ground. Meanwhile, shallot sales have been cut in half.

Behind such atrocious results was the generally poor weather experienced during the autumn, the mild temperatures felt throughout the winter and the Russian embargo.

Tomatoes and strawberries were two products that experienced limited damages, while onions, courgettes and salads enjoyed a good season.

Sica also highlighted the rude health of the organic market, with volumes and sales both up, as well as the markets for old and mini-vegetables, which have risen by 50 per cent.

President Jacob reiterated the importance of innovation in overcoming turbulent years such as 2014, including the development of new product ranges and marketing approaches, as well as the targeting of new markets.

"40 per cent of our turnover comes from exports, and each time we look abroad we enjoy success," he said.

This spring, Sica is launching a new shipping route between Morlaix, in Brittany, and China, passing via the Russian capital, Moscow.