Chile wakes up to African potential 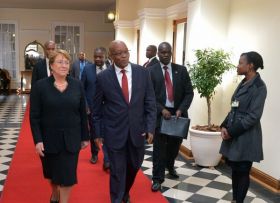 The pace of Africa’s economic development will create significant new opportunities for Chilean fruit exports in the years ahead according to a study by ProChile. The trade promotion agency says rising income levels and increasing demand for high quality imported produce suggest that the continent is on the brink of an economic boom similar to those seen in China and India in recent decades.

African coordinator Nestor Riveros said 17 of the 54 African nations have been growing at an annual rate of 5 per cent in the past ten years, while in eight countries the growth rate exceeded 7 per cent. “The outlook from the African Development Bank is for the continent as a whole to grow by 4.5 per cent in 2015 and by 5 per cent in 2016,” he said.

Africa’s population is projected to double from 1bn to 2bn inhabitants over the next 40 years, making it one of the world’s biggest consumer markets. Riveros cited a report by McKinsey showing that by 2020, 71m households (29 per cent) will have an annual income of more than US$10,000 and in 128m households the figure will exceed US$5,000. This would give Africa a bigger middle class than India and similar GDP to Russia.

Chilean president Michelle Bachelet carried out an official tour of Africa last year, following in the footsteps of Venezuela and Brazil which have similarly sought to strengthen political and economic ties with the continent.

In 2012 Chilean exports to Africa totalled US$329m, of which food accounted for 47 per cent. Apples were the only fresh fruit in the top ten foodstuffs shipped, with shipments reaching US$12m.

“We see good potential for Red Globes, apples and kiwifruit as well as for dried fruits and nuts which are consumed regularly by the Arab community, particularly during religious festivals,” said Riveros.

He pointed out that rapidly rising income levels in countries with high reserves of oil and minerals, together with the 54m tourists who visit Africa ever year presented excellent opportunities for fruit as well as other Chilean products such as wine and salmon.

The government is currently in market access negotiations with the Southern African Customs Union (SACU), made up of South Africa, Botswana, Lesotho, Namibia and Swaziland, as well as with other countries in Southern Africa including Angola, Malawi, the Democratic Republic of Congo and Mozambique.

A second trade mission to North Africa is due to take place in October with the aim of improving market access for Chilean agricultural products and eventually establishing a Free Trade Agreement with the Economic Community of Western African States (ECOWAS), a trading block made up of 15 countries including Nigeria, the Ivory Coast, Gambia and Ghana.

On 18 August ProChile, the Ministry of Foreign Affairs and the Federation of Chilean Industry (SOFOFA) are jointly hosting a seminar on new business opportunities in Africa in Santiago.

“The event will look at the prospects in Africa for public and private entities and hear from companies already exporting to this market, as well as from representatives from a number of African states on their vision for the future of Chilean-African trade,” said Riveros.