Banana exports to Iran get lift 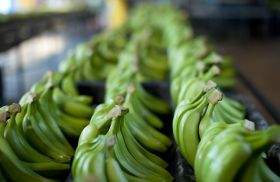 Philippine banana exporters are anticipating a rise in shipments to Iran this year following the lifting of sanctions against the country, according to a report from Sun Star.

Stephen Antig, executive director of the Pilipino Banana Growers and Exporters Association, said that Iran had previously encountered problems making payments due to the freezing of bank accounts.

Nevertheless, Iran still placed third among the Philippines’ top export destinations for fresh and dried bananas, including plantains, according to the Philippine Statistic Authority Davao 2015 first quarter export data, with a total free on board (FOB) value of US$8.1m.

Japan has remained the top export destination for banana exporters in the Philippines during the period at US$37.4m, followed by China at US$33.7m.

A total of US$94.2m in FOB export value was recorded by the region during the same period, with a gross weight of 349,483 tonnes. This year, according to Antig, Iranian demand stands at 48m boxes, each box weighing around 13kg.

According to a report from the Philippine Quarantine Service (PQS), a total of 6,086,499 boxes were exported to Iran in the year to June 2013 compared with 9,524,208 boxes the previous year.