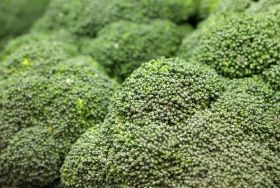 Broccoli contains almost double the level of vitamin C than oranges and should be consumed regularly to help ward off colds, according to research undertaken in Spain.

The study, carried out by the Department of Food Science and Technology (CEBAS-CSIC) on behalf of Spanish marketing association +Brócoli, shows that two portions of raw broccoli (100g) contain 90mg of vitamin C, 45 per cent more than a glass of orange juice.

The vegetable also has high levels of natural antioxidants (polyphenols) and glucosinolates and produces sulforaphanes. These have been shown to activate protective enzymes in the respiratory tract and have led to the conclusion in the US that broccoli sprouts are an effective treatment for asthma.

Researcher Diego Moreno said this cocktail of phytochemicals can help in the seasonal fight to prevent colds and other immune system problems. He pointed to – as yet inconclusive – trials being carried out in the US that suggest that at least 40g of broccoli eaten 1-3 times per week can help consumers avoid contracting colds.

Moreno added that for optimal results, the broccoli should be consumed with other fruits and vegetables, such as oranges and radishes.