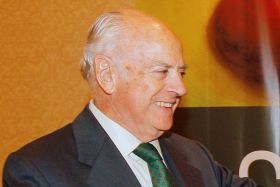 One of the pioneers of Chile’s fresh fruit industry, Carolus Brown Barroilhet, has passed away, industry association Fedefruta has confirmed.

Brown Barroilhet, father of Fedefruta’s current president Juan Carolus Brown Bauzá, was responsible for introducing new types of fruit to Chile, including new varieties of stonefruit, apples, pears and table grapes – the latter including Red Globe, a prevalent and highly sought-after variety on the international market.

He also played an instrumental role in promoting the country’s fresh produce to markets around the world, while encouraging scientific research in order to improve and advance the sector.

Brown Barroilhet’s company Fundo El Guindal, which continues to trade under the name Brown Group from its base in Calle Larga in the province of Los Andes, remains one of the country’s major fruit and vegetable exporters thanks in no small part to his decision to “dabble in fruit exports” more than five decades ago.

Brown Barroilhet’s funeral is due to be held on 16 February in Las Condes.

“Fedefruta deeply regrets the death of Brown Barroilhet and shares in his family’s grief,” the group said a statement.