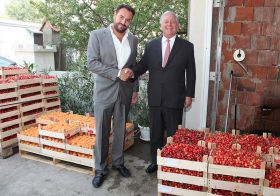 Serbia’s fresh cherry export business could be on the verge of a major commercial breakthrough after one of the country’s leading suppliers signed a sourcing deal with the local arm of Belgian retail giant Delhaize.

Eurofruit understands that the agreement, which was signed last week, could open the door for Ritopek Cherries – a relatively new entrant in the international fresh produce market – to secure further supply contracts with Delhaize in other parts of Europe.

Key to that agreement being signed is the investment made by British entrepreneur Jon Robinson, a contribution sizeable enough to warrant a special visit by Crown Prince Alexander of Serbia to conduct the official opening of Ritopek Cherries' new packing facility in June 2015.

The project has since also attracted the attention of the British royal family, with Prince Charles taking the opportunity to speak to Robinson about the strong commercial potential for Ritopek Cherries during a visit to Belgrade earlier this year.

According to Robinson, the new company is “putting Serbia on the map” when it comes to cherry production.

“Our product is first class following my investment into the industry,” he explains. “I have single-handedly reshaped cherry exports for the Republic of Serbia, becoming the number one exporter in the entire country.

“I have changed their farming methods and introduced new processes, implementing GlobalGAP and EU packaging [standards].

“I also purchased the only cherry sorting machine in the entire country of Serbia. We are the only company able to sort the cherries by colour and size, guaranteeing our end-users a first class product with GlobalGAP certification and thus putting Serbia on the map for cherry production.”

Taking its name from the nearby village of Ritopek, which Robinson explains was identified as having the sweetest cherries due to the crosswinds and the reflection of the Danube river, the company has identified a possible gap in the market, Robinson adds.

“Apart from Spain, Serbian cherries are the first cherries to hit the market [in Europe],” he notes. “Their Brix value is extremely high and in fact they are some of the sweetest and largest cherries I have ever tasted.”

Delhaize Group currently has around 800 stores in its home country of Belgium, as well as large-scale networks in Greece, Indonesia, Luxembourg, Romania and Serbia, plus a major operation in the US under its Food Lion banner.

The group is currently planning to merge with the Netherlands’ largest food retailer, Royal Ahold, following an agreement made public in mid-2015.

Shareholders in both companies recently rubber-stamped the deal, leaving it down to competition authorities to give the merger the final go-ahead.

That consolidation could mean further opportunities not too far down the line for Ritopek Cherries.

“We are now signed to supply all of the Delhaize outlets for the entire country of Serbia, and next will be a contract for 400 of the [Delhaize] outlets in Greece and 300 in Romania,” Robinson reveals. “We are also in talks for a further 800 stores in Belgium. I think it is the biggest cherry contract on record for Serbia.”

With that kind of potential for growth, Serbia’s impact on the European cherry business could be highly significant over the next couple of years.