Annual exhibition Freskon put Greece’s exporters in the spotlight last month, with new markets across the Middle East and Asia the top priority 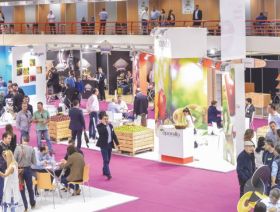 Fresh produce exhibition Freskon returned to Greece’s second city, Thessaloniki, on 21-23 April, as the Greek sector united once again under one roof. In addition to the exhibition side of the show, a number of parallel events took place, including the B2B Freshcon Market and the first International Vegetables & Asparagus Conference. Organisers TIF-Helexpo announced a 30 per cent rise in exhibitor numbers, which stood at 246 exhibitors from 25 countries, while the number of hosted buyers increased by 35 per cent, with over 2,500 B2B meetings taking place with exhibitors.

Such figures were hugely encouraging considering the list of challenges facing Greek companies, a list that never appears to diminish, including new harsher terms on insurance and taxation for the agriculture sector and the continuing Russian ban.

Those companies selling domestically have been the hardest hit, as low wages reduce purchasing power, while cartons, punnets and other packaging materials, which need to be imported, are more difficult to obtain due to capital controls. However, those focused on exports have felt less of an impact, allowing them to continue making important investments in their businesses.

“The problem in Greece is financial,” says Christos D Sextos of NEA Exfrut, based in Skydra in the north of the country. “Since we are an exporter, we don’t have so many problems.” NEA Exfrut is the biggest exporter of cherries in Greece and a major player in kiwifruit, sending mostly to central and eastern Europe. “We finished construction of our second 10,000m2 packhouse a few months ago. It is located in Rizo, allowing us to store kiwifruit very effectively. If you see an opportunity to expand your business, it is a good time to do it. You can’t develop without taking a few risks.”

The company is now also making plans for its grapes, pomegranates and asparagus. “We are also one of the top companies for white asparagus,” says Sextos. “A decade ago, asparagus growers were switching to stonefruit, but now they are going back, as prices improve. This is our second year for pomegranates. There are a lot of farms in Greece, but there wasn’t the proper guidance for re-exports, so we are going step by step. NEA Exfrut invests in growers by assisting them in improving quality. We want to have good relations with our growers so they produce the quality required for export. We need each other.”

Nefeli Fruit is another exporter that is thriving despite the present challenges.  “At the beginning, the economic situation here was very hard,” says Konstantinos Sidiropoulos. “We had to adapt to the situation. If you are a good business you can get through this. We did very well this year. We are focusing on kiwifruit and cherries. The market is more vibrant and growing. It is difficult for some items, including peaches and nectarines, due to the low prices, but we also do a whole range of fruits.”

Like the majority of Greek exporters, Nefeli is also stepping up its search for new markets. “Since the embargo by Russia, we are trying to expand to more European countries, and we are succeeding, since we are able to match the quality and packaging requirements,” says Sidiropoulos. “We can fulfill the orders very quickly, to be ready the next day. We are also looking at the Middle East, where we currently send to Egypt, Saudi Arabia and the rest of the Arabian Peninsula. We’ve been selling to the Middle East for a few years and looking at doing more business. Most young people in the Middle East have studied in Europe or the US so they are used to western culture. There is therefore good demand for our fruit.”

Present at Freskon was Charalambos Kasimis, secretary general of agricultural policy and management of European funds at the Greek Ministry of Rural Development & Food, who suggested that the end of sanctions on Iran could have a positive impact on trade between the two countries. “There has been a big effort to seek new markets due to the Russian ban, so we are happy to see new opportunities opening up throughout the world,” he says. “The Greek government recently paid a visit to Iran, and we hope to be able to export technology, equipment and knowledge there in the future.”

According to Ali Golbaf of Iran-Agri Magazine, Iranian growers require assistance in adopting modern industrial methods of agriculture, including the use of efficient irrigation systems. Understandably, there is equally a lack of experience when it comes to exports. “Iran needs investment in modern agriculture,” he says. “If there are any Greek investors, the Iranian state will help them. In Iran, there are no restrictions on foreign ownership like there are in places like the UAE, so there are opportunities for companies that want to set up businesses to export Iranian products to other markets.”

Asia, however, still remains the prize target for most Greek exporters. “Entering Asia is the next step for every company that wants to grow,” affirms Sidiropoulos.

One exporter with a firm foothold in Asia is Zeus Kiwi. “Kiwifruit markets are struggling all over the world due to high production from Italy and Greece, so prices have been low,” says George Kroussaniotakis of Zeus Kiwi UK. “Companies are therefore looking further east. We did very well on the Chinese market this year, with volumes increasing by almost 20 per cent from Zeus.”

The company has recently made a foray into Crimson Seedless grape production, planting 15ha and planning a further 20ha. “This shows the belief we have in the product,” says quality control manager Antonis Ioannidis. “We are looking forward to a successful grape season. We have established ourselves with all the supermarkets in the UK and Netherlands. Scandinavia is another target.”

Around 1,500-1,700 tonnes is estimated to be available this year, growing to 2,500 tonnes in the next two years. “We are in the enviable position of having higher demand than supply,” says Ioannidis. “More and more growers are being persuaded to cover their production to protect from rain. This allows us to harvest in the third week of November, which is our best window, when Spain and Italy have almost finished, and when Peru and Brazil are a distant, expensive alternative.”