European stonefruit output down in 2016 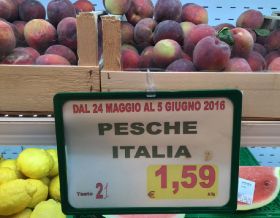 Europe’s stonefruit production is set to fall this year, according to delayed forecasts for the season now underway.

As revealed by Italian group CSO, the forecast volume for fresh peaches in Italy is expected to be slightly under 1.4m tonnes, down on the previous year.

In France, production is also set to fall, while in Spain it is set to be around the same as last year, mainly as a result of a further increase in flat peach output compensating for a downturn in round types.

Production in Greece is expected to rise compared with last year, but remain below the average for the previous four years.

As far as clingstone varieties are concerned, the overall European trend identified by CSO is a slight decrease, with a fall in Spanish early volumes counter-balanced by a recovery in Greece.

For nectarines, meanwhile, the picture in overall volume terms is remarkably similar to that for peaches.

Europe’s combined nectarine production is forecast to fall by 6 per cent to a little over 1.4m tonnes.

Aside from Greece, where output is set to increase slightly, other major producing regions are expecting a gentle decrease.

“Faced with an anticipated fall in production in Europe for 2016, we’re expecting the timetable in terms of product entering the market to be very well defined and spread out through the course of the whole season,” commented Elisa Macchi, director of CSO.

“We’re not going to see an overlap between north and south, as happened in previous years,” she added, “and, if the conditions are favourable, we won’t have the high peaks in new supply that characterised the 2014 and 2016 campaigns.”

Italy’s predicted downturn in terms of production is thought likely to affect all varieties.

For peaches, the fall will be fairly consistent in the south and particularly in Campania, Italy’s first production area to come online.

The same is true for clingstone varieties, while for nectarines a decrease is also forecast in the north of the country.