Koper to benefit from state investment 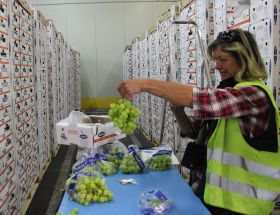 Egyptian grapes being inspected at the Port of Koper

The Slovenian government has announced plans to invest almost €17bn in new transport projects over the next decade and a half, potentially offering the country’s main commercial port, Koper, with new opportunities to grow.

Apparently topping the list of possible expansion projects is the building of a second rail track between the port of Koper and the Italian border, as well as a more general modernisation of rail infrastructure on the pan-European network.

It delivered oranges, mandarins, grapefruit and potatoes from Israel to receivers in the Rotterdam port area, before the produce was then forwarded on to clients elsewhere in northern Europe.

As Eurofruit reported last year, Koper is also a major entry point into the European Union for a range of produce exports from Egypt.

As reported by the Slovenia Times, infrastructure minister Peter Gašperšič said the state had earmarked around €600m-€700m per year for transport development until 2030, with a further €300m provied by other stakeholders.

A total of €9bn will be poured into infrastructure investments during the period 2016-2022, with the government contributing more than half.

During the following eight years, an additional €7.9bn is set to be invested, again with significant government support.

“Positive effects of the national programme are evident in constant investment in infrastructure, which has positive effects on the economy, economic growth, road safety, the impact on the environment," Gašperšič told reporters.