Spanish port strike to go ahead 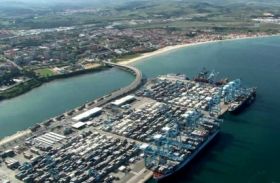 Spanish port workers say they will go ahead with planned strike action over government plans to reform the country’s port system.

The International Workers’ Federation has announced that a walkout will take place on alternate days for a three-week period from 6 March if the Council of Ministers approves the Stevedores Port Law Reform this Friday as expected.

An earlier strike on the 20, 22 and 24 February was suspended at the end of last week to enable further negotiations between the unions and employers on the implementation of the new law.

The dispute is already disrupting operations at a number of ports, affecting traffic in and out of Spain.

Stowage association Sageb-Sevasa said as many as 12 ships had been forced to change their navigation plans to avoid stopping at the port of Valencia, where workers are staging a “go-slow” that has reportedly led to a 30 per cent drop in productivity since last week.

Begoña Jimenez of exporter federation Fepex said if the strike goes ahead it will have little impact on the sector as 95 per cent of Spanish fruits and vegetables are sent via trucks.

However, Spanish companies have been making steady inroads into non-EU markets in recent years, many of which are reached by sea. With an already complicated citrus campaign in full swing, there are fears that prolonged action could affect shipments bound for emerging markets such as China, the Middle East and South America.

Stonefruit producers, meanwhile, are warning that unless the situation is resolved, it could affect the new season when it gets underway in June.

Miguel Ángel Gómez of Extremadura grower association Afruex told EFE that exporters rely heavily on ports such as Algeciras to ship produce to countries like Canada, South Africa and the UAE. Around 70,000 tonnes of fruit from Extremadura was shipped to foreign markets through the region’s ports last year.

According to Fepex, around 600,000 tonnes of fruits, vegetables and flowers were sent to third countries in 2016, accounting for 6 per cent of Spain’s export total.

The strike could also disrupt imports of pineapples, bananas and counterseasonal products such as melons.

Spanish imports of fresh fruits and vegetables have been rising steadily since the start of the decade. According to figures released by Fepex on Wednesday, imports increased by 17 per cent in value and 12 per cent in volume in 2016 to €2.313bn and 2.9m tonnes respectively.