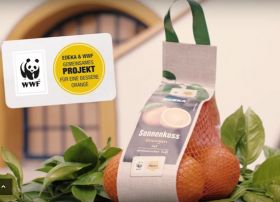 Andalusian grower-exporter Naturgreen, part of the Iberhanse group, has become the first company to export citrus bearing the World Wildlife Fund logo as part of an initiative by German retail Edeka to advance sustainable agriculture.

The Zitrus Edeka project, which seeks to promote biodiversity, the efficient use of water and good agricultural practices, was unveiled at a launch event held at Naturgreen’s Seville headquarters last month.

Under the scheme, Naturgreen has allocated around 200ha at its El Esparragal farm for sustainable production. The company has just harvested its first oranges which is being sold in Edeka stores bearing the WWF’s distinctive panda logo.

Felipe Fuentelsaz, WWF’s agriculture coordinator for Andalusia, explained that humidity sensors had been installed in order to control water usage with the aim of reducing consumption by 8 per cent.

A number of phytosanitary treatments that are known to be harmful to fauna have also been eliminated, while the introduction of plant cover, nesting areas and wildlife refuges are designed to encourage greater biodiversity.

“The scheme is already bearing fruit and this year we have managed to reduce the number of treatments thanks to the performance of indigenous secondary fauna,” he said.

Fuentelsaz noted that while production volumes had been similar to previous years, citrus bearing the WWF logo could be sold at a higher price at retail.

WWF will continue working at El Esparragal for a further three years, extending the scheme from 200ha to 800ha.