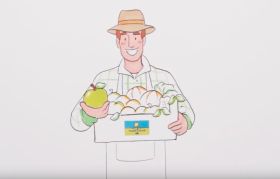 Carrefour Italia has unveiled a new premium fresh produce brand called Filiera Qualità (Quality Chain) to promote fruit and vegetables it says are sourced sustainably from around 4,700 of its Italian suppliers.

According to the retailer, the brand stands for products that meet the highest ecological standards, in other words fruit and vegetables that are produced and distributed with respect for the environment and biodiversity.

Commenting on the brand’s launch at Salone Carrefour, an annual meeting involving around 150 of the retailer’s suppliers and a thousand of its sales staff, Carrefour Italia’s commercial and marketing director at Grégoire Kaufman revealed that a third of its customers were now actively looking for products compatible with a healthy lifestyle, while a quarter apparently chose the retailer for the quality of its fresh produce.

“Filiera Qualità represents a Made in Italy that is looking to the future, a future that appreciates the land and its excellent stars – the producers – guaranteed by Carrefour Italia for its own customers,” he said.

“We were among the first in Italy to start talking about the supply chain 16 years ago. Ever since, we have believed in the importance of controlling every single step between the producer and our customers’ tables. For 16 years, we have guaranteed the trusting relationship between producers and consumers, and against that background today we are renewing our commitment to quality, sustainability and social responsibility. We want to lead this change by successfully interpreting, and responding decisively to, new market demand.”

Elsewhere at the meeting. Carrefour Italia and research group Crea-Api revealed they were working together to establish a new certification standard for citrus supply, to be marketed under another new brand called Viversano Carrefour (LiveHealthy Carrefour).

MaDi Fruit, a supplier based in Catania on the east coast of Sicily, is set to be among the first companies to adopt the new standard.