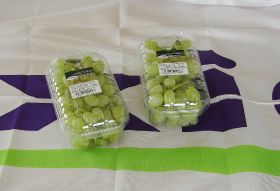 Greece, the second-largest producer of table grapes in the European Union, should see an increase in production and exports for the 2017/18 campaign.

There are some 17,000ha planted with table grapes in Greece, a figure that has remained steady for the past few years, and fruit quality generally is expected to be good.

"Thompson Seedless and Victoria are the leading table grape varieties grown in Greece," the USDA stated. "Crimson Seedless is showing an increased interest for new plantations, currently planted in 1,000 ha; Crimson grapes are forecast down 20 per cent for the current year.

"Moreover, a greater focus is now being placed on diversifying Greece’s grape offer to extend the marketing season into October and November," the report continued. "Other varieties cultivated include the table grapes Prime, Superior, Flame, and Cardinal."

It is anticipated that the country's apple production will slide 5.2 per cent to 282,000 tonnes, mainly due to the hail that occurred in the apple growing areas of northern Greece.

This will not stop exports climbing slightly, however, with the USDA forecasting them to grow slightly to 90,000 tonnes from 89,628 tonnes in 2016/17.