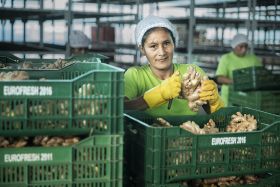 Eurofresh is beefing up its organics portfolio to capitalise on rising consumer demand in Europe and other markets.

The company prides itself on being able to supply organic Hass avocados 365 days a year and it is now looking to extend its range with the introduction of new exotic lines including ginger, turmeric and mango.

International sales manager Sergio Pérez-Borbujo sees opportunities in every corner of the globe. We believe there is the potential to develop surprising and different products from countries like Ecuador, Thailand, Kenya and Vietnam,” he says.

At present the company’s production base spans Spain, Peru, Colombia, the Dominican Republic and Morocco. In addition to owning its own farms it works with around 700 local growers, managing around 3,600ha overall. Its biggest operation is in Peru, which accounts for approximately a third of its output.

Last year the company beefed up its organic avocado offer with the introduction of fruit from the Dominican Republic and this year it launched the first Fairtrade organic avocados from Peru.

“Organic avocados are our flagship product and the one that really defines us as a company,” says Sergio Pérez-Borbujo. “We believe in growing 100 per cent organically, using the highest food safety standards and without compromising on quality and flavour. We control the whole value chain from the field right through to delivery to the supermarket to ensure that this is achieved.”

This approach is the reason why Eurofresh decided to set up its own ripening and packing operation in Rotterdam four years ago. Explaining the company’s philosophy, Pérez-Borbujo says: “We don’t treat fruit as a commodity. Behind every avocado that we grow we see a consumer whose wellbeing and values we respect”.

He likens the service the company provides to a tailor-made suit designed to fit the customer perfectly, be it small retail packs or large-scale formats for the foodservice industry.

Eurofresh was quick to spot the potential of avocado cultivation in Colombia and Morocco and took the decision to develop a production base in both countries some five years ago. Pérez-Borbujo claims both have cultural idiosyncrasies that make them quite different from other countries and says establishing a production base required “vision and a lot of perseverance that is now beginning to bear fruit”.

“Colombian avocados are still largely unknown in Europe, although they are gradually starting to gain traction. The climatic and soil conditions in the country require very specialist treatment and there are not many companies that have the expertise to export the fruit,” he says.

With the recent opening of the US market to Colombian avocados and negotiations well underway to secure access to various markets in Asia, Pérez-Borbujo is confident that Colombia has a bright future ahead – an optimism he shares about the organics movement in general.

“Countries like Germany, Switzerland and Austria were the first to embrace the organics trend some 20 years ago, and the market is still going strong, with our sales increasing by around 20 per cent a year,” he notes, adding that US retailers like Walmart and Costco are also committing to organics in a big way.

The next frontier for Eurofresh is Asia. Although the market still lags a long way behind Europe and the US, Pérez-Borbujo observes that importers, retailers and even governments are working hard to increase the consumption of organic produce.

“The forecasts suggest that the market will grow exponentially over the next five years and when this happens we’re facing a scenario when there may not be enough fruits and vegetables to supply the European market,” he warns.

“Europe’s retail sector is undergoing some profound changes and if supermarkets want to remain competitive and guarantee their supply they will have to get closer to producers and optimise the value chain. That is the only way in which they will be able to take on the likes of Amazon, who are set to cause real disruption in the industry.”

In the mean time, he says Eurofresh will continue to invest in its production and expanding its packing capacity to handle its expanding product range.

“Our investment in food quality and food security will continue to grow, as will our goal to consolidate our position in new markets such as South Korea and Singapore,” he says. “Further down the road, we plan to develop processed to complement our portfolio of tropical fruit.”