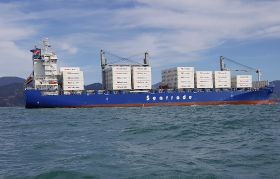 Seatrade, the world’s largest reefer vessel operator and owner, has revealed that the vessel sharing agreement (VSA) announced in 2017 between itself and CMA CGM will not proceed in its intended form.

According to Seatrade, which operates over 100 specialised vessels transporting perishable cargo across the globe, the original service linked Northern Europe, the East Coast of the US, Central America, the Pacific Islands, Australia, New Zealand, Peru and the Caribbean on a weekly basis.

However, the group said that it had evaluated its global strategic options considering market conditions – an evaluation that includes its future involvement in the Meridian Service.

"Seatrade has reached an agreement with CMA CGM to restructure the VSA,” the group explained. “The service will be upgraded to a weekly service as from January 2018, and will, among other vessels, utilise Seatrade’s fully cellular and geared 2,200 TEU Colour Class specialised container vessels, combined with container equipment currently controlled by Seatrade.

“Seatrade is pleased to have reached this agreement with CMA CGM securing continuation, schedule reliability and highest possible service level for Seatrade’s major customers in the trade,” the group added.

While the involvement of Seatrade in the New Zealand to Northern Europe trade is reduced, Seatrade explained that it will continue to provide its Fast Direct Dedicated services to worldwide markets for transportation of perishable cargos.