The country's shipments of stonefruit are on track after a slow start, but crop expectations have been adjusted downwards 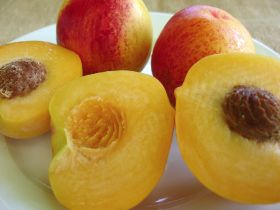 South African stonefruit industry leaders warned at the start of the season that 2017/18 would be a tough campaign.

Originally optimistic about the early part of the season, they now enter the Christmas period knowing that the real drought and water shortage problems in the Cape region may only manifest themselves during the mid-campaign and later.

Despite this, exporters have said growers are optimistic about reaching their targets. In fact, the level of the present stonefruit forecast demonstrates remarkable resilience in the face of the challenges posted by the drought and water shortages.

The drop in the forecast is at this stage really not significant, but fruit sizes may be a challenge later on.

Export volumes for apricots have been readjusted to just over 600,000 cartons, compared to last year’s 774,000 cartons, a drop of 21 per cent brought on by drought and alternate bearing of trees.

Nectarine volumes will be 4 per cent lower than last season at 3.95m cartons compared to last year’s 4.07m cartons.

Early season peach volumes are expected to fall by 2 per cent compared to the previous season. However, the mid- to late-season volumes are forecast to be 12 per cent lower than last year. Overall, peach exports should come to just over 2m cartons.

With the first real significant plum arrivals due in the market by mid-December, the total plums export volume is expected to be 7 per cent below that of the 2016/17 campaign.

The next few months will determine just how big the effect of the drought and water shortages will be. Exporters, however, say that the early season crop is entering a very positive UK and European market, with strong returns.

Growers are also adapting to the challenge of the new EU regulations on False Codling Moth (FCM) which comes into play on 1 January 2018. The Department of Agriculture, Forestry and Fisheries’ (DAFF) verification process of a 20 per cent sample of all registered orchards and packhouses was due for completion in the first week of December.

Stonefruit industry body SASPA took additional steps by conducting independent inspections as part of its own verification process, as an additional measure to ensure self-regulation of risk mitigation.

“Our growers understand that we have to comply to participate in these markets, and although it increases pressure on us, it has already become part of our normal activities,” said one exporter.

More prominent in the minds of stonefruit producers is seeing what the long-term effect of the drought will be.

“We do not know what the effect will be on next year’s crop if the trees suffer stress this season,” said an industry expert. "While water supplies from dams in the Cape have been cut back, many growers have found alternative sources through sinking bore-holes which is putting them in a reasonably good position."