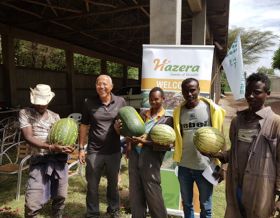 The company’s commercial director in Africa, Jawdat Badawieh, spearheaded a project to distribute hybrid seeds for the tomato variety in several Ethiopian villages.

Under the aegis of the Hazera team, farmers are able to grow these vegetables, initially for their own consumption but subsequently for commercial purposes.

According to Hazera, the project has made such a huge change to the lives of Ethiopian farmers that they now refer to “life before and after the Shanty”.

“Beyond providing our customers with hybrid seeds for healthier, hardier crops, Hazera also delivers much needed support,” said Badawieh. “For example, Hazera helped Ethiopian farmers obtain a water pump and fertilisers, further contributing to a significant change in their lives.”

In Africa, the company’s hybrid seed marketing is focused on onions (Neptune and Russet being the leading varieties) and tomatoes (Shanty and Galilea), with watermelons, cabbages and peppers reportedly in the pipeline.