The Greek exporter was founded back in 1928 and intends to use its 90 years of experience to take advantage of the growing potential for kiwifruit, cherries and grapes 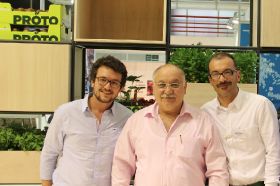 The Protofanousis family has been specialising in the fruit trading business since the early 20th century when current president Nikos Protofanousis’s grandfather began trading fruit and some vegetables in the narrow alleys of the small and disorganised market in Thessaloniki, in northern Greece.

After the great fire of 1917, which destroyed a large part of the city, the fruit market became more organised in a small square on the outskirts of the city. After the Turkish invasion of Smyrna in 1922 and the mass evacuation of the Greek population from the western, now-Turkish seaboard, thousands settled in northern Greece, raising demand for products including fruit and vegetables.

Nikos Protofanousis officially started the business in 1928 with his son Yannis, staying afloat through the civil war and through a dictatorship that kept Greece in a state of turmoil for over 30 years.

Greece joined the EU in 1981, but it was only after 1989 that the financial situation improved on the Greek market. By then, Nikos Protofanousis, named after his grandfather, had already taken over the family business and expanded its operations, with small quantities of fruit exported to nearby markets in the Balkans.

It has now been 90 years since the elder Nikos started trading fruit in those back alleys of Thessaloniki, and today his great grandchildren, Yannis and Alex, are ready to take over the largest Greek cherry exporter and one of the largest kiwifruit exporters in Europe. With table grapes and plums adding to the lineup, Proto supplies Europe, Southeast Asia, the Middle East, North America and North Africa with high-quality fruit.

The company has identified kiwifruit in particular as having huge trading potential, as customers worldwide learn of the fruit’s nutritional value, and demand is slowly but steadily increasing. The experience gained year after year by Greek growers and packers alike has led to an increase in quality and quantity, turning Greece into an important competitive force.

As the leader in Greek kiwifruit, Proto is already planning for the future storage, handling and packing of its annually increasing quantities. Since the company believes in the worldwide growth of the kiwifruit market, it is already designing the construction of a brand-new packhouse with a handling capacity of approximately 20 tonnes an hour, to be added to its existing 10-tonne-per-hour facility. Proto is also investing in golden kiwifruit varieties, with trials planned for the immediate future.

The new cherry sorter that the company used during the 2017 season helped Proto increase the quantity and quality of its cherry exports. Turkish cherries are generally considered to be the best on the European market, but Proto is determined to make European consumers aware of the quality of Greek cherries. For 2018, Proto’s goal is to sort more than 5,000 tonnes of cherries.

Table grapes also have good potential in EU markets. Proto has invested in new varieties that can be shipped until mid-December without compromising on colour or size. Since grapes are difficult to sort by machinery, with human labour remaining the key factor, Proto is considering investing in workstations with the latest technology and design to improve productivity, while assisting workers in keeping up with the detailed work that needs to be performed when handling grapes.