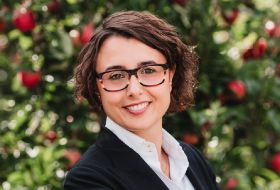 The creation of Europe’s first ever federation of female fresh produce industry professionals is a major step closer.

With support from Simona Caselli, president of Areflh and founding member of Donne dell’Ortofrutta, the plan was presented by Giulia Montanaro of Italian apple industry organisation Assomela and is understood to have been met with strong interest.

Montanaro is expected to lead the project’s development, with support from Simona Rubbi, international relations manager at Italian agency CSO.

“We took Simona’s advice to reinforce our national identity and to bring an international dimension to the association,” Montanaro commented.

“What we propose is firstly to try to inform and involve female entrepreneurs and professionals from those regions of Europe associated with Areflh to create in other EU countries something similar to what we have in Italy, and thus lay the foundations for some initial coordination which can then lead to a true European federation.”

Caselli added: “The proposal to work together with other European companies belonging to Areflh represents an interesting opportunity to approach the fruit and vegetable sector in a different way. The new vision, a female one, is fundamental not only because communication in the sector is directed mainly at us women, but [also] because we are an integral part of that same sector.”

She also suggested that Areflh would be in a position to support Donne dell’Ortofrutta in developing the kind of network necessary to extend the project into other parts of Europe.

Areflh currently brings together representatives from several different fruit and vegetable producing regions in Belgium, France, Italy and Spain, as well as member producers from those countries as well as Austria, Greece and Portugal.