EU apricot yield to fall by nearly a quarter 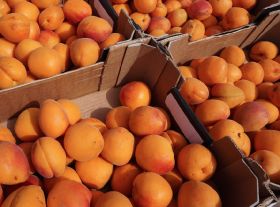 European apricot production could fall by nearly a quarter this year after poor weather hit the continent and a disappointing 2017 campaign.

The estimates were announced at Medfel today, showing a European-wide drop of 18 per cent from the record high of 679, 817 tonnes notched up last year.

Only Spain was anticipated to increase production, while Italy, France and Greece all revealed a likely drop in yields according to Europech’.

Well-documented hailstone outbreaks and late frosts have hampered production in all four countries. Europe’s largest producers, Italy, are expected to achieve around 201, 138 tonnes in 2018, with Spain second at 142, 709. France is anticipated to produce around 134, 448 tonnes with Greece the smallest grower at 79,800.

Elisa Macchi, CSO executive in Ferrera, Italy, said: “The campaign this year will be completely different. We have a reduction of production, we had hailstone and frosts in February and the beginning of March which impacted production particularly in Emilia Romagna region. The selling campaign will be late by 10 days at least and possibly even 15.”

In France, Sabine Alary, co-chair of SIPMM Apricots, said: “I think we will know more in a fortnight, it will be less, but by how much it’s difficult to say, we have had frosts and decreased temperatures.”

Speakers from all countries agreed that the record harvest in 2017 was not matched by demand, leaving farmers “unhappy with the industry”.

Santiago Vazquez Herrera, of Cooperativas Agro-Alimentarias in Spain, said: “2017 was a not a good campaign. Up to the summer we had the right temperatures and we had maximum production.

“But this was not accommodated by the bad weather in Europe in the north. The temperature was cold and the consumption of these fruits goes down when it’s cold.

“The volume was very strong but there was very little demand and the prices were very low.”

Herrera added that the apricot industry needs to market better with more campaigns to generate the demand needed to expand.

“Consumption of apricots is being reduced. Consumers should know our product better. We’re competing against other fruits and companies,” Herrera said.