Producers are missing out as European market grows by 50,000 tonnes a year 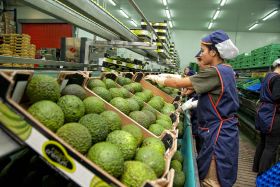 Avocado producers in southern Spain are failing to capitalise on surging demand due to a lack of water.

As the campaign in Málaga and Granada draws to a close, the industry estimates that around 55,000 tonnes of the green fruit will be harvested in 2017/18, a similar volume to last season.

Benjamín Faulí of regional growers union Asaja Málaga noted that in spite of consumption in markets like the UK growing by around 30 per cent a year, the lack of water meant that production had effectively remained stable for years.

“A number of reservoirs were built in the area some years ago but they are not connected to farms,” he said, adding that completing the job would mean planted area could increase considerably.

“Málaga and Granada have the ideal soil and climate for the production of tropical fruit and if water was not an issue the region could double its production area,” said José Linares, president of the Spanish Association of Tropical Fruit Producers.

With around 10,500ha of avocados, Málaga and Granada account for the bulk of Spain’s annual output of 60,000-65,000 tonnes. The remainder comes mainly from the Canary Islands where production is declining.

The lack of opportunities to expand production has led some companies to seek alternative ways of generating new revenue. Some have opted to produce new trees to export to neighbouring countries like Morocco and Portugal.