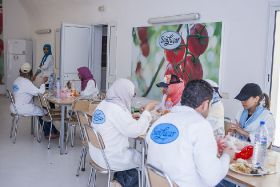 SanLucar has received a national award from Tunisian president Béji Caïd Essebsi in recognition of its efforts to improve the working and living conditions of its employees at its Tunisian farm.

The award was presented at a ceremony in Tunis on 1 May, was also attended also by the prime minister, the president of the parliament and all ministers.

In addition to SanLucar, other companies were honoured in four different categories.

A total of 3,500 private and public companies from various industries were nominated for the awards.

In addition to improvements in working conditions, the social progress award honours the promotion of communication between the various actors in production.

Yves Graf, country manager for SanLucar Tunisia, accepted the prize and gave thanks to all attendants for the award.

SanLucar employs around 1,500 people in the north and south of the country, mainly in the cultivation of tomatoes and berries.

It was the first company in Tunisia to receive GRASP certification for good social management.

The company’s d.r.e.a.m.s. programme for corporate responsibility has established numerous projects for sustainable and responsible action.