The Dutch organics specialist has been rewarded for its Natural Branding packaging concept, the company’s solution to unsustainable plastic pollution 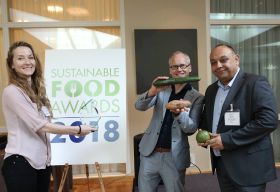 Dutch organics and sustainability specialist Eosta last week walked away with the prize for sustainable packaging at the first Sustainable Food Awards, held at the Sustainable Foods Summit, organised by Ecovia Intelligence in Amsterdam.

Eosta won the award for its ‘Natural Branding’ concept, which the company has been using on organic produce since 2016.

The method is Eosta’s answer to planet-polluting plastic, a contact-free, organic approach to marking fruit and vegetables using a laser.

The method has already enabled the company to save 6.3m plastic packaging units, with major retailers in Sweden, Germany and the Netherlands embracing the technique.

Paul Hendriks, Eosta's packaging innovation manager, commented: "As I always remind people, the most sustainable way to pack is not to pack. Natural Branding makes this possible. Green consumers are delighted, because research shows again and again that they disapprove of oil-based plastic packaging."

Together with its retail partner ICA in Sweden, Eosta started applying Natural Branding on organic avocados and sweet potatoes in December 2016. Many supermarket chains followed suit, including Rewe, Netto and Edeka in Germany, Spar in Austria and Hoogvliet and Albert Heijn in the Netherlands.

Just last week, Dutch supermarket chain Jumbo joined the party, announcing that it would apply the technique on its courgettes, ginger and pumpkins.

Since EU law stipulates that organic products must be readily distinguishable from non-organic products, packaging has been a convenient, if incongruous, way to go. Eosta has therefore been working on developing sustainable packaging alternatives for a number of years, moving from bioplastics and compostable stickers to sugarcane cartons, cellulose netting and Natural Branding.

Natural Branding is currently being applied to Eosta's avocados, courgettes, ginger, coconuts, cucumbers, mangoes, pumpkins and sweet potatoes. However, sustainability manager Michaël Wilde revealed that the concept's success had spurred the company to look at its entire product range.

"Everything's been coming to a head over the last few months, with protests about excessive packaging in supermarkets and the arrival of plastic-free aisles," he said. "Companies now need to show consumers that change is possible and that they are working on solutions."