The new South African citrus season in the US will be boosted by the arrival of the first reefer vessels. 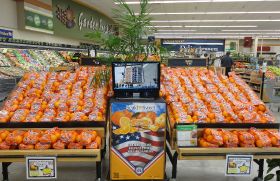 The US Independence Day holidays have always been regarded as the kick-off of the major part of the South African Summer Citrus campaign, and with the first reefer vessels now arriving, this year will be no different.

Summer Citrus from South Africa (SCSA) previously announced that it is entering the 2018 campaign in the US in a positive mood in spite of the challenges associated with the droughts occurring in the Western Cape.

Rains over the Western Cape over the past two weeks will have further boosted morale for the rest of the season. “Although there is still a long way to reach acceptable dam levels, it seems as if we are heading for a normal winter rainfall season,” said one weather forecaster.

The major regions producing citrus fruit for the US market are located in Citrusdal in the Olifants River Valley, where water shortages have been critical.

The recent rains have boosted dam levels in the Cape region to levels better than the same time last year. “If this continues,” said forecasters, “dam levels could be above 80 per cent by October.”

Boet Mouton, chairperson of SCSA, said South Africa was on track to deliver more or less the same volumes as last year. “We are happy with the fruit quality and even happier about the rain.”

The first containers of easy peelers, followed by Navels and Star Rubies, started to arrive in the US at the end of May. SCSA earlier announced that the first reefers would be in the port of Philadelphia by mid-June. The season is expected to last until October.

Last year the country exported just over 122m cartons to the world’s markets. This year it is expected to grow to 133m cartons and to reach 160m by 2025.

Expanded access to the US comes too late for other growers to take advantage of the situation this season. Those sectors of the industry currently experiencing considerable growth are expected to watch the American move with great interest as they plan their strategies for 2019.