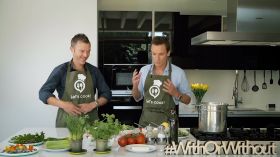 A new three-part video series from the European Crop Protection Association (ECPA) brings food experts and agricultural influencers into a Brussels test-kitchen where they discuss the challenges of modern farming while preparing a meal.

With the help of special guests, the series explores the perceptions and misconceptions surrounding food production, with the consumer-friendly videos designed for release and sharing via social media channels.

The first episode features Will Evans – host of the podcast Rock and Roll Farming – who, while preparing ingredients, explains “There are a million things that want to kill my crops; the more options we have to fight against them, the more safe and affordable food we can grow".

Let’s Cook! is part of a wider ECPA campaign to engage with the issues surrounding crop production, inviting consumers to consider a future with or without crop protection methods.

Even with the use of safe pesticides, up to 40 per cent of crops are destroyed by plant pests and diseases globally according to the EU, a figure that could increase to 80 per cent without their use.

“We want to have a dialogue about the ways in which we produce sufficient food and fibre to satisfy the demands of a growing population," explained ECPA director general Jean-Philippe Azoulay. "We all expect food to be safe, affordable and nutritious. Our new series Let’s Cook! is part of an open discussion on the ways we can achieve this, and the role our sector in particular can play.”