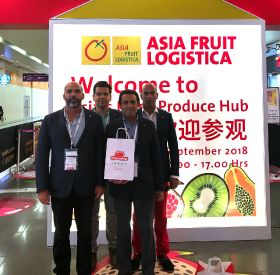 The company said the fair had been an opportunity to meet with existing customers and welcome potential new buyers from countries such as Thailand, Singapore, Cambodia and Malaysia, among others.

“We don’t see the distance to market and high demands Asian buyers place on suppliers in terms of quality and diversity of packaging formats as barriers to growth,” said Jaime Zaforas.

“Fresón de Palos made several successful shipments to this part of the world throughout the 2018 season and we anticipate sustained growth in the medium term, which could be accelerated if the Chinese market were to open for direct exports.”

The company has held talks with the Spanish authorities about the urgency of securing a soft fruit protocol with China in order to give Spanish producers and marketers access to a market of 1.4bn inhabitants.