Following an extensive review of its Hungarian facility, Greenyard says it is ready to restart production 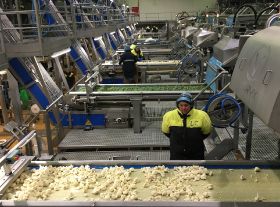 "Following this clearance, Greenyard is ready to supply customers with products from its Hungarian facility and in addition we have secured alternative solutions to compensate for temporary unavailability of certain products to ensure that our customers experience the least possible inconvenience," the group stated. "Greenyard regrets the impact this potential contamination case and the subsequent recall has had for our customers and consumers, and thanks its customers and consumers for their continued support and trust.

"Health and food safety are our number one priority at any time, and this has allowed us to identify and remedy the situation, in line with all rules and procedures and in close collaboration with competent authorities."

"We refer to the EFSA website for further information on the research on the link between the breakout and our Hungarian plant," the group said. "In line with local authorities, Greenyard would like to stress again that cooking instructions on the package are to be followed to properly prepare frozen products.

"With the restart of the plant, Greenyard is confident that the full financial impact of the recall will remain within the earlier mentioned €30m (net after insurance).