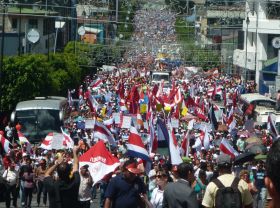 The general strike in Costa Rica is causing increasing disruption to the country’s fruit exports. Pineapple and banana producer associations said that losses were running into millions of dollars and rising for each day the walkout continues.

Last week the Chamber of Producers and Exporters of Pineapple (Canapep) said that its members had been unable to export around 650,000 tonnes of pineapples due to roadblocks impeding access to the port.

As of 21 September, Canapep estimated that losses had reached around US$3.5m – a figure that is likely to be significantly higher now that the strike has entered its 18th day.

Jorge Sauma of national banana corporation Corbana said hundreds of thousands of boxes of bananas destined for the US and European market had been lost due to exporters being unable to reach the port of Moín.

Sauma condemned the actions of some unions who have blocked access to the port.

“This is a serious problem – in other countries we see union demonstrations but they do not block the ports,” he told Diario Extra.

The Chamber of Exporters calculated that the strike had caused total losses of US$90m during the first week alone, with perishable products bearing the brunt of the damage.

With both sides refusing to back down, the standoff between the government and public sector over planned tax reforms shows no signs of resolution.