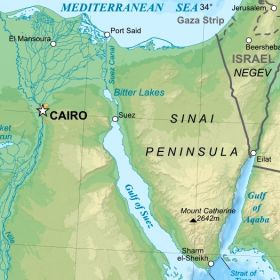 Egypt is set to build the largest sewage water treatment plant in the world as it faces up to water shortages that could affect half a million people in Sinai, according to a report from Egypt Today.

The plant, which will be located east of the Suez Canal, will treat the sewage and agricultural wastewater of the country’s longest drain (Bahr El-Baqar 1), and will be ready in around two years, the minister of water resources and irrigation, Mohamed Abdel-Atti, revealed.

The 106km drain of Bahr El-Baqar, which dates back to 1914, extends from Dakahlia to Port Said, with the longest stretch located in Sharqia.

Previously used solely for agricultural wastewater, the drain was equally used for industrial waste and sewage from the 1970s, leading to increased pollution and affecting soils.

General Assem Abdullah Shukr, head of water administration at the Armed Forces Engineering Authority (AFEA), which is responsible for building the plant, said that it would produce 5m cubic metres per day to cultivate 250,000 feddans (one feddan is equal to 1.038 acres).

"Wastewater goes into Lake Manzala [in Port Said governorate], which contains agricultural, human and factory wastes, causing people to complain of the water,” said Shukr. “So the wastewater was directed to another course for agricultural usage.”

Another drainage water plant is set to be established in Mahmasa City, in Ismailia governorate, according to Shukr. This plant will produce 1m cubic metres of water to irrigate 50,000 feddans in Sinai in order to create urban communities, he said.