With volumes from New Zealand expected to last until the end of the year, Greek kiwifruit exporters are prepared for heightened competition on the European market 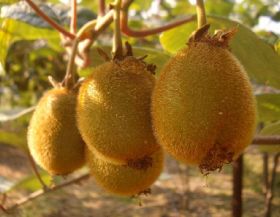 As the Greek kiwifruit harvest gets started, exporters are eyeing the remaining volumes of Zespri kiwifruit from New Zealand with impatience.

“There is still lots of New Zealand kiwifruit around, which will slow demand for European kiwifruit,” says Christina Manossis, general manager of Greek exporter Zeus Kiwi. “The global market is being cautious, especially the Chinese. Intake from Europe will be delayed while good-quality Zespri is still available. Volumes from New Zealand are not expected to finish until the end of December.”

In the meantime, Zeus Kiwi is closely monitoring its own production, both on-site and remotely. “We have a cloud system so we can check the database from anywhere to find all the latest information on pruning, treatments and the harvest date,” says Manossis. “It was developed by our in-house developer and is upgraded each year. We have cameras installed all around the packhouse, so we can see how things like quality control are going even when we’re out of the office.”

According to Manossis, exports to overseas markets are set to start immediately, including to Latin America and the US. Sendings to China are anticipated in the second week of November, while exports to Europe will commence towards the end of the month.

“It is important to start as quickly as possible in markets like Latin America,” says Manossis. “As long as the quality is good, we should ship large volumes to our markets until May.”

However, high taxes continue to make life difficult for Greek companies. “They make us less competitive, as do the bank interest rates,” says Manossis. “Energy costs are much higher for us than for our competitors, which increases the costs in the field and in the packhouse.”

Faced with intense competition for the green Hayward variety, Zeus Kiwi views golden varieties as the future of kiwifruit. “We are trialing golden kiwifruit,” reveals Manossis. “In five years we will have sufficient volumes to test in the UK, China and Indonesia. We want to get feedback from the field first to evaluate the suitability of the varieties and then check the market’s reaction. Then we will be in a position to choose the right variety with the best shape, size and taste.

Manossis believes that it is crucial for a company to differentiate itself at this time. "The future is with golden, especially in Asia," she says. "There is so much green Hayward that prices are suffering as a result. So we need an alternative to become more profitable and to differentiate ourselves from the competition, while providing guidance to our growers for viable cultivars.”

The company is currently investing in new-technology sorting machines complete with 3D cameras, mainly for use on kiwifruit.
“You need good production, but you also need ultra-modern machinery to sort and pack correctly and cost-effectively,” says Manossis. “This will give our fruit more uniformity in terms of quality, while we will also require less labour.”