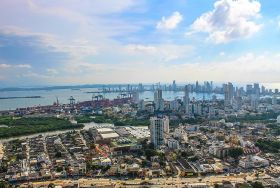 The new hub will connect services in Europe, Asia and Latin America with Central America and the Caribbean. It will be operated entirely by Panalpina, offering customers more than 30 new LCL services, reduced transit times and greater coverage.

“According to global economic projections, growth is expected to reach 1.7 per cent in 2018 and 2.3 per cent in 2019 in Latin America and the Caribbean,” said Clas Thorell, Panalpina’s global head of ocean freight LCL.

“We want to be part of the future of this emerging market by offering financially viable solutions to customers who source or distribute in these markets.”

“The future opportunities it opens up are real possibilities for our customers to pursue investments in the region and that is what we are looking to achieve – solutions that foster growth for Panalpina, our customers and the communities where we operate,” he said.

Panalpina’s inbound services operate weekly into the Port of Cartagena from Belgium, France, Germany, Italy, and Spain in Europe; Miami and New York in the US; Altamira and Veracruz in Mexico; Costa Rica, El Salvador, Guatemala, Honduras and Nicaragua in Central America; the Dominican Republic in the Caribbean; Argentina, Brazil, Chile and Peruin South America; and South Korea in Asia.

Outbound services operate weekly from the Port of Cartagena to the Netherlands in Europe; New York in the United States; Veracruz in Mexico; Costa Rica, El Salvador, Guatemala, Honduras, Nicaragua and Panama in Central America; Curacao, the Dominican Republic, Jamaica, as well as Trinidad and Tobago in the Caribbean; Argentina, Brazil, Chile, and Peru in South America; and South Korea in Asia.