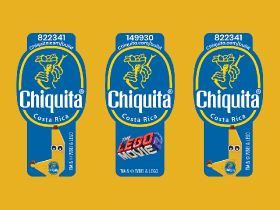 Banana brand Chiquita has secured another promotional tie-in with a major animated film, this time with the introduction of a brick-built banana character called Banarnar that will star in Warner Animation Group's upcoming cinematic release The Lego Movie 2: The Second Part.

Starting in mid-January and running for a four-week period to coincide with sequel's February release, more than 300m blue Chiquita stickers in the US and several European countries will feature some of the film's most recognisable characters, including Banarnar itself.

Central to the tie-in will be a focus on fun, collaboration and family values, said the company, which will place special codes on the stickers that give fans a chance to play online games and win themed prizes.

From 17 January until 24 February, fans can enter a daily promotion called ‘Chiquita Build For A Chance to Win’. By collecting the film-themed stickers and submitting the unique codes, they will have a chance to win prizes including cinema tickets, Lego sets and gift vouchers.

“Chiquita bananas are bright and fun just like our fellow iconic brand Lego, which is why we are thrilled to team up with The Lego Movie 2: The Second Part,” said Jamie Postell, Chiquita's director of sales in North America.

“Chiquita shares the common values of brightening up our consumer’s days and encouraging fun and laughter for all.  We hope to provide a little bit of sunshine and happiness this winter season, inspiring fans to discover our special stickers, collect them and share the love.”

In addition, the company has also developed a set of recipes inspired by the film and designed to encourage building and teamwork among family members.