Russia’s iFarm Project has attracted significant investments to facilitate the cultivation of salads, vegetables and berries in cities 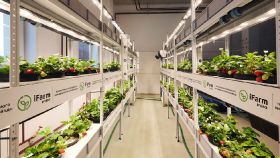 The iFarm Project has raised US$1m thanks to investments from Gagarin Capital, Sergey Ryzhikov, CEO of 1C-Bitrix, Sergey Ambrosov, board director of the Russian Association of Franchising and former CEO of Invitro, and Artem Rudi, co-founder of Atlas clinics and Uniscan Research.

The technology behind the project’s vertical farms and year-round greenhouses was created by iFarm. Aimed at small and medium-sized businesses, iFarm facilitates the development of urban crop production via easy-to-use plug-and-play modules. For example, growing instructions are downloadable from a centralised database.

“The modules also include seeds, fertilisers and electronics, all optimised for an urban environment,” the company stated, “and require significantly less electricity, water, and fertiliser than conventional greenhouse methods.”

Farm units can apparently be set up in empty warehouses, workshops and basements, even on the roofs of buildings.

“Each farm is connected to a cloud-based management system, which sets the growing conditions, and a unified network of sales distribution,” the company revealed. “No pesticides are used and crops aren’t chemically treated for long-term storage because delivery to sales outlets comes within an hour of harvest.”

Founded in June 2017, the iFarm Project grew to a team of over 30 by the end of 2018, having built five greenhouses and vertical farms, opened its own shop and set up partnerships with restaurants and retailers.

“The investments from this round will be used to develop technology and expand our team, including our engineering, construction and agro project teams, as well as to pilot the technology on the European market,” explained Alexander Lyskovsky, iFarm founder and CEO.