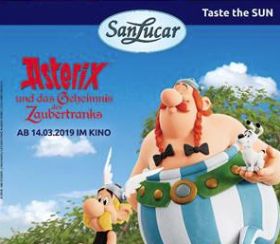 SanLucar has teamed up with Asterix and Obelix for its new promotional campaign.

To celebrate next month’s release of the Gallic heroes’ latest film, The Secret of the Magic Potion, stickers of the Gallic cartoon heroes will appear on SanLucar-branded strawberries, pineapples and bananas, as well as a special smoothie mix, in German supermarkets.

The campaign, which runs from 11 March to 22 April, will feature colourful displays, recipes and posters at the point-of-sale, as well as online activities on Facebook and Instagram. Consumers will also have the chance to win a family weekend at the Tropical Island Resort in Germany.

This is SanLucar’s latest collaboration with popular children’s film characters. Previous campaigns have featured Maya the Bee, Paddington and the Grinch.

“Through our cooperation with popular film figures we aim to motivate children to enjoy fruit. Precisely for them, a healthy diet is very important,” said Nuria Pizán, brand and creative director at SanLucar.

The latest film sees the druid Miraculix search for a successor, to whom he pass on the secret of the magic potion.

“Because Asterix and Obelix love their magic potion so much, we created a new delicious smoothie,” said Alex Thaller, director SanLucar Austria.

“And it’s not just the taste that plays an important role – nature is likewise important. The company protects the soil, handles water with care and counts on ecological control.”