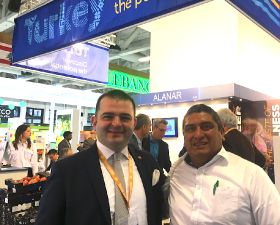 Turkish fig specialist Alanar has announced a partnership with a major Peruvian producer in order to ensure year-round availability of its figs.

According to Alanar’s marketing and sales manager, Yiğit Gökyiğit, the company has teamed up with the biggest and best grower of figs in Peru. “They will be growing for us and doing local sales, and we will be taking care of all exports,” he said.

Alanar is the biggest supplier of Turkish black figs, sending to over 40 countries worldwide. “We were receiving a lot of demand for out-of-season figs, so we started looking at suppliers, including in India and around South America,” said Gökyiğit. “In the end, we found Peru.”

The variety is called Toro Sentado, meaning “Sitting Bull” in Spanish, and is unique to the region. For Alanar, a major consideration was how well the fruit would travel.

“We did some trials,” said Gökyiğit. “The journey time was around 10-15 days, after which the fruit was still quite solid. After a further ten days, it was still good, so we decided to finalise the partnership.”

Following last year’s takeover of Alanar by Turkish conglomerate Tekfen Holding, a number of investments have been in the pipeline and, according to Gökyiğit, achieving all-year-round supplies of figs was one of them.

“We are also building our new packhouse at the moment, which should be complete in March 2020,” he added. “This will boost our production capacity by two to three times. In figs and cherries, we are the biggest in Turkey. These investments will help us to compete with the likes of Chile and the US, making us one of the biggest in the whole world.”