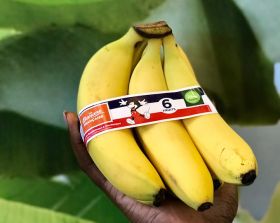 The Union of Banana Producer Groups of Guadeloupe and Martinique (UGPBAN) has launched the ‘Banane Enfant’ in France, a banana specifically targeted at children of 3-10 years old and their parents.

The new product was unveiled at the Salon de l'Agriculture exhibition in Paris, a bunch of bananas wrapped in the familiar tricolore ribbon but bearing the recognisable image of Mickey Mouse.

The Disney character is intended to pique the interest of young consumers, while the smaller sized fruits are seen as more suitable as a child’s snack.

The Banane Enfant, which follows UGPBAN’s launch of the Banane Française  last year, will reportedly be available in supermarkets from April.

"The advantage of Mickey is that he is transgenerational, so both children and parents are attracted to this iconic character on the shelves," said Jean-Claude Marraud des Grottes, who is responsible for developing French bananas at UGPBAN.

A production volume of 6,000 tonnes per year is initially anticipated. Through its franchise agreement with the Walt Disney Company France, which is set to receive royalties on sales, UGPBAN says that it plans to “convey values such as the healthy side of the Caribbean banana”.