French chefs are set to get creative with the launch of Goût de France, which this year highlights the importance of social and environmental responsibility 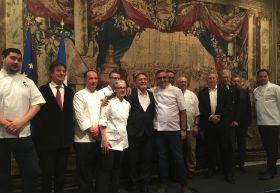 This week, French ambassador to the UK Jean-Pierre Jouyet hosted a number of French chefs at the London embassy to mark the launch of the fifth edition of the Goût de France festival.

On 21 March, 5,000 chefs in 150 countries across the world will be offering a dinner à la française – a chance to promote French gastronomy while creating links between chefs around the world.

The gastronomic destination for 2019 will be Provence-Alpes-Côte d’Azur, according to Jouyet, with a focus this year on socially and environmentally responsible cuisine.

Jouyet described embassy chef Gilles Quillot and the other chefs present as an important symbol of French gastronomy around the world.

Dimitra Agapidis, chef at West London’s Les Douceurs De La Tentation, said that the festival was a great way to motivate chefs to be creative.

This year’s celebration will highlight respect for the planet and healthy eating, showcasing local farmers, local produce and socially and environmentally responsible production.

Goût de France supports the "No More Plastic" foundation, which is committed to protecting the oceans and reducing plastics, with 5 per cent of the benefits of the 21 March meal going to the foundation.

This year, Jouyet revealed, the Embassy of France to the UK was also proud to support Eamon Moore of the Emmaus charity, which assists formerly homeless people at 29 sites across the country by giving them a home, meaningful work and a chance to rebuild their lives.

Moore is the chef for the Emmaus community in Norfolk, which is currently developing a new restaurant concept, Belly of Emmaus, to serve the local community.

“A lot of these people have had mental health problems and lived on the streets, as I did in London for a year,” said Moore. “The support and services available to people like me aren’t always enough, and more and more are becoming homeless.

“Our aim is to help people to get back on their feet, including by training them to cook, make bread, bake cakes. We are doing some fundraising to get the kitchen sorted out, and the garden, where we want to grow a lot of vegetables and herbs.”

Goût de France is also supporting the Clink Charity, which helps to reduce reoffending through the training and rehabilitation of prisoners, helping them to gain qualifications in service, professional cooking and food hygiene.