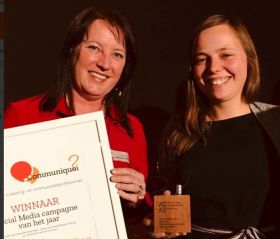 The award ceremony took place this week during Communiquoi, the congress for Limburg marketing and communication professionals organised by VOKA Limburg and PXL University.

Not unusually, the Belgica apple has its own Facebook page, which plots the entire journey of the Belgica from the field to the store.

Consumers have also been encouraged to share a photo on social media using the #Belgicalove hashtag to stand a chance of winning the services of a chef for a fruity three-course meal at home for four.

The company has also utilised banner adverts on third-party sites that link to the campaign website, with the express aim of standing out from the crowd.

“The results are quite remarkable,” stated advertising agency Idearté. “In Flanders, nice images, such as of the child, worked best. On the other hand, our French-speaking neighbours resolutely opted for the naked man and ambiguous puns.”

Perhaps most unorthodox, however, was the campaign’s use of Tinder. “If you want to seduce these days, you have to be on Tinder,” the campaign stated. “And that applies equally to Belgica. If we look at its matches on Tinder, this apple is very popular on the market. So swipe right on the Belgica man or woman and enjoy their juicy stories.”

A radio spot also features Belgian singer Soetkin Baptist rework her catchy Eurovision entry from 2008, describing the Belgica as “the apple of your dreams”.

Backed by such a broad campaign, Belgica has understandably appeared in all national newspapers and radio stations and even made it on to Belgian talk show Gert Late Night.