Sustainability comes under the spotlight 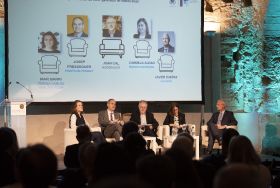 Leading Spanish agri-food companies gathered in Lleida this week to discuss the United Nations’ Sustainable Development Goals (SDGs), a global action plan for companies and institutions to on sustainability, labour rights and solidarity.

The event kicked off with a presentation by Ángel Es, president of the Spanish Global Compact Network, who explained what the 17 SDGs were and their objectives in terms of protecting the environment and human rights.

Sebastià Escarp, president of Catalan fruit producer Fruits de Ponent, then outlined the steps that the cooperative is taking to make its operation more sustainable.

The company’s CEO, Josep Presseguer, also took to the stage to explain the company’s solidarity actions and energy efficiency programmes.
This was followed by a round table discussion with representatives of Fruits de Ponent, Mahou San Miguel, Segre and Grupo Cajamar on how businesses could incorporate sustainable practices in their day-to-day operations.

They require countries to commit to ending all forms of poverty, fighting inequalities and tackling climate change, while ensuring that no one is left behind.