Agreement will see the development of over 2,000 hectares and will involve hazelnuts, almonds and pistachios 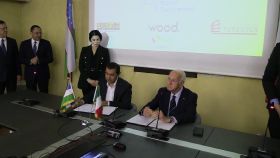 Italian dried fruit and nuts leader Besana has revealed that it is expanding more and more to identify new partners for the production of nuts.

On 7 May, at the headquarters of ‘Unioncamere’ in Rome, Besana signed an agreement to produce hazelnuts, almonds and pistachios in Uzbekistan.

The Memorandum of Understanding was signed by the ambassador of the Republic of Uzbekistan in Italy, Otabek Akbarov,  and the president of Besana Group, Pino Calcagni.

The project within the Uzbek Republic will cover a total area of over 2,000ha in two different regions of the country.

About half of the two thousand hectares are part of the 'BEK Cluster' project, launched last year in the Syrdarya region, where over 5,000 people already work. Another 1,000ha are located in the Namangan valley, in the province of Pap.

"The Republic of Uzbekistan is experiencing a period of strong development and differentiation of its agro-industrial business," explained Calcagni. "Historically linked to the production of cotton, today the local economy, supported by the political foresight of its president, feels the need to replace and integrate these crops.

"Many years of monoculture are likely to impoverish the land and make it more vulnerable to insects," Calcagni added. "In this context we have agreed to support the country to develop nut cultivations, in particular hazelnuts, almonds and pistachios. In fact, there are ample margins to work satisfactorily in this sector, thanks to the pedoclimatic characteristics of the area as well as the strong will and working energy demonstrated by the Uzbeks, both for the present and for the future."

The Besana International Project in Uzbekistan will officially start in autumn 2019 and will continue at least until 2022.

As already put in place in countries where the group has already started partnership agreements, such as Kazakhstan and Ukraine, Besana will provide local operators with a proper 'turnkey' development model, including agronomic advice, know-how, supply of plants propagated in certified Italian laboratories (therefore free from viruses) and even indications on the choice of the most suitable agricultural machines, with the possibility then of stipulating contracts of purchase of future crops.