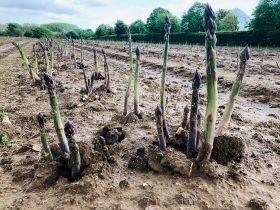 Asparagus seed supplier Global Plant Genetics has made initial launches of the Guelph Eclipse and Guelph Equinox cultivars in the past two years, and seed volumes of both are now being ramped up as growers’ requirements increase.

The varieties come from the same stable as the renowned Guelph Millennium, which has become established as a high-yielding type for harvest later in the European season.

The key point of difference between Millennium and the two other varieties is that the latter are harvested much earlier. Trial data shows that both of the new asparagus hybrids are among the very earliest green types to crop in Northern European conditions.

As a result, total marketable yields have been increased to new levels for green asparagus.

“The 2019 season is no different. Increased yields per asparagus plant will help to drive efficiencies within major asparagus businesses across Europe. We very much see these varieties driving a new green revolution in asparagus production and marketing.”