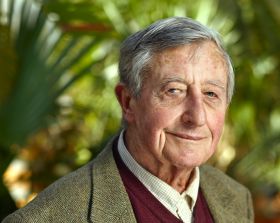 Netherlands seed developer Simon N Groot was announced as the 2019 World Food Prize Laureate this week for his work in helping millions of smallholder farmers in more than 60 countries to enhance vegetable production and improve nutrition.

As the founder of East-West Seed, Groot worked on developing vegetable varieties with enhanced disease resistance and significantly higher yields.

According to a release from the World Food Prize, the use of his seeds has spread throughout much of South-East Asia, including the Philippines, Thailand and Indonesia. This has allowed millions of farmers to move from subsistence farming to horticulture entrepreneurs while consumers benefited from greater access to nutritious vegetables.

Kenneth M Quinn, president of the World Food Prize Foundation, announced the award, which is known as the ‘Nobel Prize for Food’, and was glowing in his praise of Groot.

“Simon N Groot has dedicated his life to improving the livelihoods of millions around the world,” said Quinn.

“Groot, in effect, developed a stunningly impactful global network of seed producers who are transforming the lives of 20m farmers every year. For this extraordinary accomplishment, he truly deserves to be named the 2019 World Food Prize Laureate.”

The release detailed how commercial vegetable breeding was all but unknown in the tropics when Groot started East West Seed. Smallholder farmers struggled to grow a good crop with low-quality, poorly adapted seed, which resulted in low yields and poverty and malnutrition for growers.

After years of research and development, starting in the Philippines with business partner Benito Domingo, Groot introduced the first locally developed commercial vegetable hybrids in tropical Asia according to the release.

To maximise the value of these seeds, the release said Groot worked with NGOs to create East-West Seed’s innovative Knowledge Transfer programme which trains tens of thousands of farmers each year in good agricultural practices for vegetable production.

Groot was excited and grateful for the prize but said ultimate recognition should go to the millions of smallholder farms that turned farming from a way of life into a business. Groot will now move his focus to Africa.

“Now it is the turn for tropical Africa where again, quality vegetable seeds combined with major farmer knowledge transfer programmes can create sustainable income for the next generation of African farmers,” Groot said.