Apricots in the Rhône-Alpes region face heavy losses after being battered by a major hailstorm at the weekend, with peaches also impacted 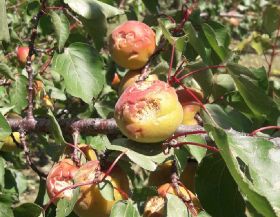 Losses from Saturday’s violent storm in south-east France have been estimated at 13,000 tonnes of apricots and 3,000 tonnes of peaches for the 16 affected companies belonging to the Association of Producer Organisations (AOP).

The hailstorm hit the Rhône-Alpes region from the west, crossing the Rhone Valley and the north of the Drôme department and then heading up through the Isère Valley, according to Raphaël Martinez, director of the AOP for peaches and apricots.

The region is considered to be crucial for the country’s apricot production. Approximately 160,000 tonnes of apricots are produced in France each year, between May and September, with around half coming from the Rhône Valley, and the remainder coming from the Gard area and Roussillon.

The storm took place just as the French market for apricots appeared to have stabilised and as many were making the switch from Spanish to French fruit.

According to Martinez, several French retailers have indicated their intention to support French apricot production at this time. “It will now be necessary to study the ways in which we will be able to give value to French apricots in all their forms,” the AOP stated.