Group is planting 2,000ha of almond trees in Beira Baixa, Portugal, at a cost of €50m 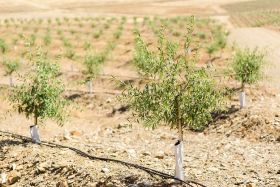 Portuguese-Brazilian group Veracruz is launching what it has described as a "mega almond plantation" in Portugal, at a cost of some €50m.

Veracruz is currently planting 2,000ha of almond trees in Beira Baixa, seen as one of the most promising regions in the Interior of Portugal, with the goal of reaching 5,000ha.

According to the group, the project also includes the installation of a shelling and processing plant for almonds.

Once completed, there will be more than 3m almond trees on 2,000ha of land, spread over five farms located in two counties of the Portuguese interior, Fundão and Idanha-a-Nova.

The investment is one of the largest agricultural projects ever carried out in the district of Castelo Branco, and has been recognised by the Portuguese Government as a PIN (Potential National Interest), a directive that highlights enterprises with relevant impact in the country and which promote economic, social, technological and environmental sustainability.

When the plantation is fully installed and production is fully up and running, the fields will produce 4,000 tonnes of almonds, all of them traditional Mediterranean varieties.

This is the first phase of Veracruz's investment which, in the future, and through the opening of capital to other investors, should reach 5,000ha of almond trees planted.

"One of our missions is to make Portugal an important player in the sector of nuts in Europe," sid said David Carvalho, co-founding partner of the company that expects to export about 70 per cent of production. "Due to its soil and climate characteristics, Portugal has great potential to become an important reference for almond cultivation, which currently is concentrated in California, accounting for 80 per cent of total production.

"On the other hand, because of its geographical location, we are very close to consumers, since Europe accounts for more than 40% of global consumption," Carvalho continued. "It is possible to enhance the reputation of the 'almonds of Portugal' brand, similar to what has happened in the wine and olive oil sectors."

The venture also foresees, by 2021, the installation of a shelling and processing plant for almonds in the same region, with an investment of €6.5m.