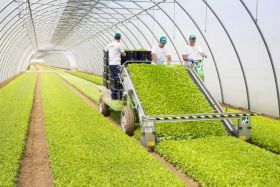 With the potential to supply an estimated 10,000 packs per day, the venture began operating less than a month ago in the province of Oristano, in Medio Campidano - an area dedicated to both conventional and organic production of babyleaf and open-field vegetables.

Antiga Sardegna consists of three units: a 3,000m2 processing plant equipped with the latest fresh-cut technologies in Oristano Marrubiu; agricultural production in the same place; and further production in nearby San Nicolò d'Arcidano.

According to La Linea Verde, the new site already offers greater production potential than the previous one, enabling it to meet the growing demands of the island market.

"The social impact on the territory is important and positive," commented Andrea Battagliola, general manager of La Linea Verde. "In fact, we have made 25 appointments to support the operation and this is only the first step."

Sardinia's importance as a commercial market appears to be growing as its tourism industry continues to expand.

Just a few days previously, it took full control of Sardinian wholesaler and distributor Fruttital Cagliari by acquiring 75 per cent of the company's capital via its own subsidiary Fruttital.